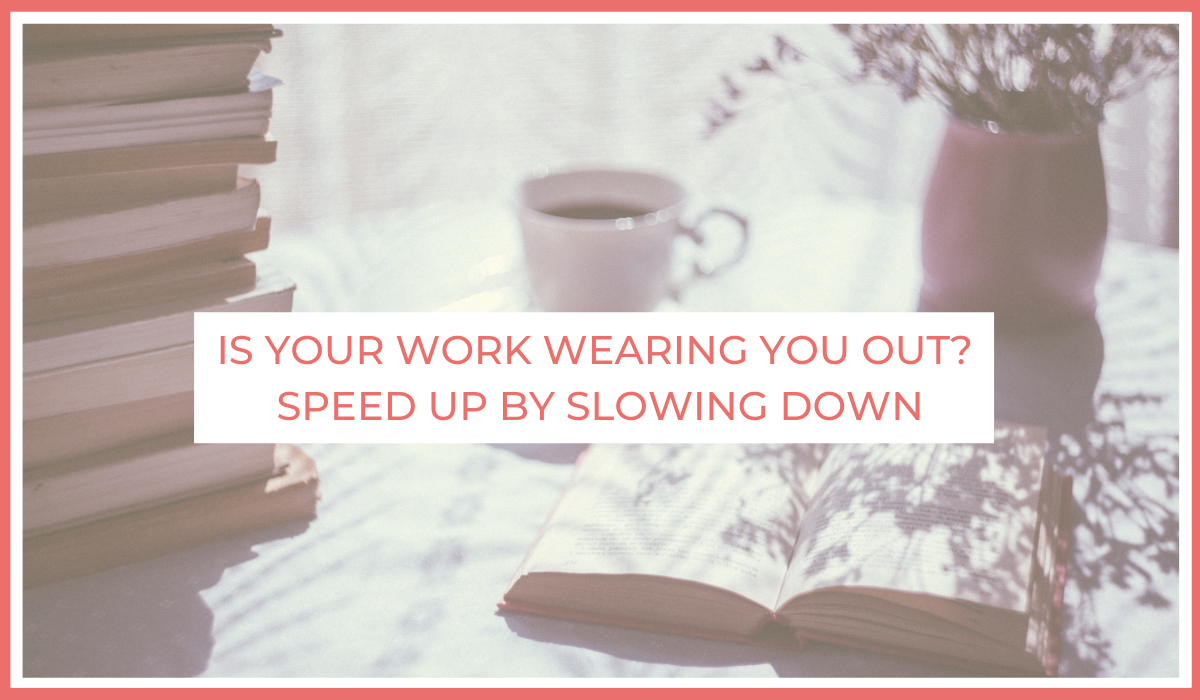 Is Your Work Wearing You Out? Speed Up By Slowing Down

It’s probably safe to say that most of us like to be productive. We may have different ideas about what “productive” looks like, but we nevertheless like to get stuff done.

And regardless of where we may land on the efficiency-effectiveness continuum, most of us like the idea of getting our “stuff” done in less time and with less effort.

Joe Sanok is right there with us. And he’s devoted much of his career to researching imaginative ways to make our work more fulfilling, more satisfying and—yes—more productive.

A licensed counselor, entrepreneur and seasoned podcaster, Joe is author of Thursday is the New Friday: How to Work Fewer Hours, Make More Money and Spend Time Doing What You Want.

I know, the book’s subtitle may sound like a pipe dream. But give it a chance. Joe offers a wealth of ideas you can put to work with your work.

Rodger Dean Duncan: A major thesis of your book is that slowing down actually speeds things up. How did you reach that conclusion?

Joe Sanok: Deep down, I think we all know this. Whether we’re in the shower, on a long drive, or in that first minute of meditation, our brains seem to work better when they slow down. However, you can’t build a thesis around something that feels intuitive, so I started digging into the research.

There was this idea around “vigilance decrement”—with “vigilance” meaning how well we pay attention, and “decrement” meaning breaking down over time. The idea for generations was that we have limited energy, and throughout the day it pours out. In other words, our ability to pay attention decreases over time.

Duncan: What role does curiosity play in a person’s ability to create fresh approaches to work productivity and the use of time?

Sanok: Curiosity is one of the three “internal inclinations” that are found in the most successful people. People often think they either have an inclination or they don’t. I would argue that we are on a spectrum as to how natural curiosity occurs, but that it can be developed.

In our culture, we’re taught that curiosity is dangerous. We all know it “killed the cat.” There was actually a front-page headline in March 1916 in the Washington Post that said “Curiosity Killed the Cat,” because a lady named Miss Mable had a cat that was stuck in her chimney for days. It became quite the news story.

But what does that teach us? Don’t take risks. Stay in your lane. Don’t question.

But one of the best goals around curiosity is not to look for the “eureka” moment, but instead to just say, “that’s really interesting.” I think about my six- and ten-year-old daughters, they are endlessly curious. They want to know how and why the world works the way it works. Those who are curious, have stopped buying into the belief that things need to stay how they are. Instead, they work to reinvent and ask themselves how to make things more interesting and productive.

Duncan: You cite research showing that employees crave an outlet for their curiosity—specifically in the form of mastering something new or enhancing a skill. What can organizations do to satisfy that craving in a way that boosts engagement and productivity while shortening the workweek?

Sanok: When we evaluate the research around worker satisfaction and staff retention, those who can remain curious through mastering a new skill are more likely to stay at their employer, and they are happier individuals.

The old model of hiring someone for a particular role and expecting them to stay stagnant is based on the industrialist’s model where people are regarded as “machines.” I would argue that we’re actually looking at a shift into more of an evolutionary model.By this, I mean that people and positions evolve, rather than remain stagnant. Effective organizations will ask their employees three important questions annually:

Within my own team, we’ve had people say they wanted video training, which has helped our social media presence. Others refined how specific they want to be, while some have broadened and diversified their positions. This helps employees who may not be satisfied with their job to improve their experience, without leaving the company.

Duncan: A study by the American Psychological Association found that more than half of employed adults check work messages at least once a day over the weekend, before or after work during the week, and even when they’re home sick. What mindset changes can help people release themselves from the tethers of technology?

Sanok: There’s a creep that happens when people stop setting clear boundaries around their time. They have an internal dialog, “What if I miss an important email?” or “What if my coworkers show more initiative?” or “What if I look bad?”

So, there are dynamics on both the employer and employee side. Employers can lead by setting expectations around what is actually expected. In addition to this, what is the timeline for returning emails or texts for other employees and clients? Is there a variation between different roles?

Also, employees can test out taking one weekend a month where they turn off notifications for email and texting to see if the sky actually falls. What if their perception is off? Also, it can work to let your boss know that every month you are going to a place without cell service and will be unavailable. Frequently, it’s more a perception that things will fall apart more than a reality.

With both employers and employees, when things fall apart (and they will), just talk about what systems and processes can help solve it, without burning out staff.

Duncan: How can a person who’s employed by someone else establish non-negotiable boundaries on work?

Sanok: Each role is different. When I was a foster care supervisor early in my therapy career, part of my role was to be on call for my foster care workers. The expectation was that I would do this 24/7. However, in talking with the other two supervisors, they didn’t like that either. We talked with the Clinical Director about rotating the weekend on-call as a test.

There were a few bumps. But, overall, the lack of stress outweighed going back to the old way. Usually, it’s helpful to start with an experiment around a few low-hanging fruit. For example, if your boss frequently texts you on the weekend and that does not feel appropriate for your position, ask if you can test another method. This could be having a calendar item that is shared for Monday morning, a note, Trello, or Slack.

Then, try to quantify the creativity and productivity you have as a result of genuinely stepping back from work. A great way to start the conversation is, “I want to get more done and increase my productivity. Can we test something out for a month?”

Duncan: If research shows that a shorter workweek often results in productivity gains, why aren’t more organizations adopting it?

Sanok: Henry Ford gave us the 40-hour workweek in 1926. It was a huge step for the evolution of business. But the industrialist’s fingerprint is still everywhere. We see it in school, our work, and in many industries. Yet, who still believes that people are just a part of a machine?

Deep down, we’ve been moving away from the industrialists, but there are still remnants. Some of those are caring about people’s time as an outcome, rather than the work they produce.

Many organizations think that if people work 20% less, they will see a 20% drop in profits. However, the research doesn’t support that worry. In fact, we see a boost in productivity, better health outcomes, and happier, long lasting employees.

Duncan: You quote Albert Einstein as saying “Life is like a bicycle. To keep your balance, you must keep moving.” How does that idea apply to people’s use of their time?

Sanok: People often get paralyzed by perfection and don’t get things done. On one end we have speed, and on the other, accuracy.

Of course, there are things that we want to be perfect or accurate. If any doctor is going to cut me open, I want her to take her time and be perfect. But most of what we do in the business world doesn’t need that level of perfectionism.

Higher education teaches us this perfectionism. We write a draft, take it to the Writing Center, redo it, turn that draft in, get feedback, and eventually give our best paper to our professor. But the business world isn’t this way. We can keep moving and discover profits, audiences, and opportunities along the way.

When we switch to using our time like a bicycle, we stop being paralyzed by perfection, and we start getting things done.

Duncan: If they’re willing to notice, what lessons about curiosity, innovation and personal balance can people learn from the Covid-19 pandemic?

Sanok: Within lockdown, I was taking my non-negotiable afternoon walk with my two daughters. Rain, snow, or shine, we were outside moving our bodies. Even though many people had a difficult time during the pandemic, many of us also discovered new hobbies, connections with others, and a more introspective attitude.

As well, it also revealed cracks in relationships and careers. In many ways, it magnified what was good and the potential we have, while also magnifying the unhealthy and things we needed to move away from.

If we’re willing to notice, the pandemic can be something that gives us permission to move toward a life where we create the work we want to do in the world and pursue healthier relationships.

Duncan: Why are you so passionate about the four-day workweek?

Sanok: When I reflect on the most important parts of life, it can be some of the work I do. But also, it’s the time spent being human. When we spend a life being stressed out and maxed out, when we buy into the fake #hustle culture, and when our bodies are depleted, how can we do the best work in the world?

For me, the four-day workweek is the next step in the evolution of business. This is the new 1926. In our generation, we have the opportunity to recreate our culture after a global pandemic. This moment will pass and eventually we’ll find our groove, but we get to decide what that groove is. Just like the Babylonians who gave us the seven-day week, and Henry Ford who pushed the 40-hour week, we can be the generation that embraced the four-day week!