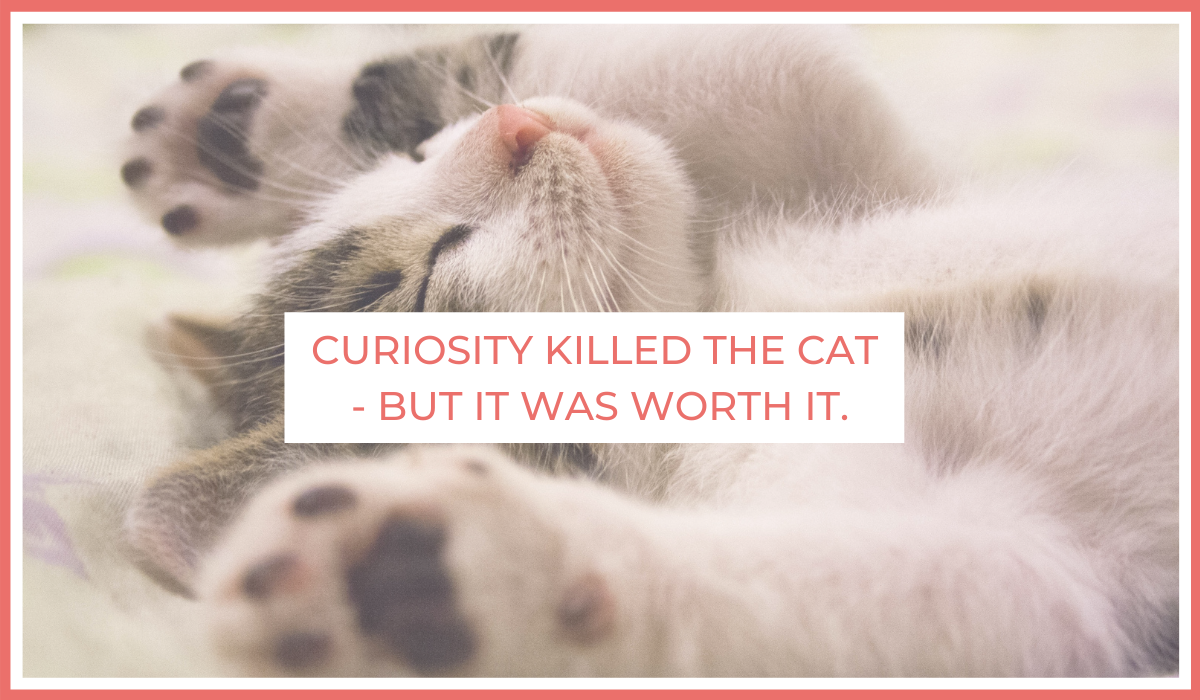 Curiosity Killed the Cat – But It Was Worth It

“Going into the unknown has been only for the strong, the stupid, and the scientific.” – Joe Sanok, Thursday is the New Friday.

The first early humans to discover and make their own fire definitely got burned – but their tender wounds served as a sacrifice for generations to come: without it, we’d still be eating bugs and berries for breakfast.

Let’s face it, we’re quite happy in our cocoon of comfortability, accepting the world at face value and never questioning the way things are – you know what they say about ignorance being bliss right? Now, I’m not saying that you need to be the next Isaac Newton, or the apple that falls far from his genetic tree – but without curiosity, there’s no innovation, and where will that take society? More selfishly, where will it help me and you? It certainly is beneficial to have innovative people around us who can make our lives easier and more efficient.

In a world with more information available to us than ever imaginable with the flick of a fingertip, it’s mind blowing how this opportunity is disregarded. We have become so caught up in life’s normalcy, of work, cook, clean, sleep, maybe watch some Netflix on Sunday, and start the cycle again on Monday.

Parents are constantly giving their toddlers new toys to play with, and they utilize curiosity to experiment with a new toy to figure out what it is and what it does. Painting is a creative mess, with colors all smudged into one – until the day a school uniform is neatly buttoned up, and curiosity is gone with the wind, replaced with color-by-number, “inside the lines, please Johnny.”

Is exploring the “world” through an excellently animated Fortnite screen, enough? Is there satisfaction in living a passive life?

Taking an active approach to making time for your own curiosity can not only exponentially improve your mental health and strength, but developing a questioning mind can be beneficial in other spheres such as your career, too.

A new study published in PloS One concludes that laziness, and being unable and unwilling to adapt to changing environments could have been a large contributor to the early humans’ extinction.

The study cites early humans who inhabited the Saffaqah site to make tools using only stones and rocks lying nearby. In so doing, they chose convenience over quality. Although less energy was expedited gathering the rocks for the tools, more energy would be needed in the long run as the tools weren’t optimally efficient.

Archaeologists investigated a nearby outcrop and noticed two things: much better quality stones, and no evidence of human presence. They concluded that the hominids would rather settle for the pieces of rock that rolled down the hill rather than investigating where those rocks came from at the top of the hill.

Has the System Killed Curiosity?

Our brains are wired wanting to know what happens and why it happened. Being curious leads to questioning things, which provides room for disrupting the norm and creating something better.

But, do The Industrialists encourage this? Does the CEO of a large company encourage employees to question the system or to stick to it? Many entrepreneurs note the benefits of taking risks as opposed to sticking to the system.

In Thursday is the New Friday,  I mention how uncertainty produces heightened vulnerability and greater reward when successful. I follow this with my observation that the most successful people I interact with maintain their curiosity by constantly asking, “can this be better, different, or improved?” I’m trying it too – hence this book, and also my services to help streamline your organizations work structure to make a 4-day workweek, work for you.

The Industrialist Mindset sees an organization as a machine: it works in a very particular way to serve a purpose. Burke suggests that businesses should instead be like an organism, which adapts to its environment in order to survive. To establish how to do so, it needs curiosity.

Until recently, the mere thought of an entire workforce operating remotely was absurd. But, why should it be? With the rapidly increasing rates of global warming, why has no one ever considered the benefit of employees working from home? It took a global pandemic to throw corporations on their head, and force them to be curious in pursuit of efficiency in the “new normal.”

With the roll-out of vaccines, most companies have returned to as they were before, with employees struggling through a 40-hour workweek, with two hours of travel per day, plus a family and personal life to uphold. There is also a burden of disease when it comes to our health systems and mental health – but that is a discussion for another day, however, I would go as far as saying that a 4-day workweek greatly benefits an individual’s mental health and lowers the demand on hospitals.

Have we seriously learned nothing in the past year as a society?

Some companies have chosen to tap into their curiosity and question the system. Is remote working a long-term viable option? If the work needing to be done can be completed during erratic hours, why are structured worktimes required? Can Thursday be the new Friday after all?

How Can We Make Time for Curiosity?

In the hustle and bustle of modern-day life, the one thing no one ever has enough of is time. We long for weekends, for time off, for a break from routine. And then, Covid gifted us eons of it unexpectedly.

Remember what it felt like to be bored? Most of us are far too busy to even have that word in our vocabulary. Because free time is such an uncommon concept to so many of us, it is often allocated to “rest and relaxation.” When we have time off, we want to do something mindless, like scroll through social media or watch a lighthearted sitcom series.

However, I argue that free time shouldn’t be an abstract concept anymore, it should be a conscious behavior, something we set boundaries for, something we’re unwilling to compromise on.

Energy and mental capacity need to be preserved for “important” things such as work and looking after children. Curiosity needs too much brainpower to be utilized in sacred free time. But does it really?

Curiosity often leads to learning something new, which results in a sense of self-satisfaction and endorphins. Does “resting” on the couch for an hour in front of the TV have any beneficial outcomes? Yes, I know that some shows are educational and do inspire, but for the most part you’d benefit more from enhancing your curiosity by taking a walk, being in nature, and meeting new people.

We live in unimaginable times, where learning a new language, musical instrument or skill can be done freely via the internet. But how many of us take advantage of this? The British Council reported that 58% of adults in the UK expressed regret at not spending more time studying a foreign language at school. But, during the first lockdown period, only a mere 10% spent their free time trying to develop that skill.

We dream about doing stuff, yet when the time does come to facilitate learning and developing our curiosity, we put it off for another day – possibly because we’re just so burnt out from the conventional 9 to 5, Monday to Friday?

Learning new skills can be beneficial in the workplace and give you a better chance of promotion above your peers. Or, it could even encourage you to question your corporate employment and consider other avenues, to take risks that can offer a much greater reward – whether financially or in terms of self-satisfaction.

In my new book, Thursday is the New Friday, I advise scheduling time in your day/week/month to encourage curiosity. I recommends beginning with asking yourself the following questions:

Accepting things as they are poses no threat in the current time, but could be dangerous in the future. The world is constantly changing, and it’s in our best interest to be curious as to how we can best adapt to the changes.

We use so much energy in daily life that in our free time, it’s unconvincing to expend even more energy being curious. But, doing so could lead to significant problem solving, resulting in less energy needed in daily life, to begin with – for example, questioning the conventional 9-5 proved the benefits of a four-day workweek.

Enforcing a curious mindset has evolutionary outcomes for the world and society as a whole. Additionally, it encourages positive personal development and strong mental health. There are no negative side-effects of tapping into our curiosity, and it’s something we all have a responsibility to practise – for ourselves, for each other, and for future generations to come.

We use cookies to ensure that we give you the best experience on our website. If you continue to use this site we will assume that you are happy with it.Ok