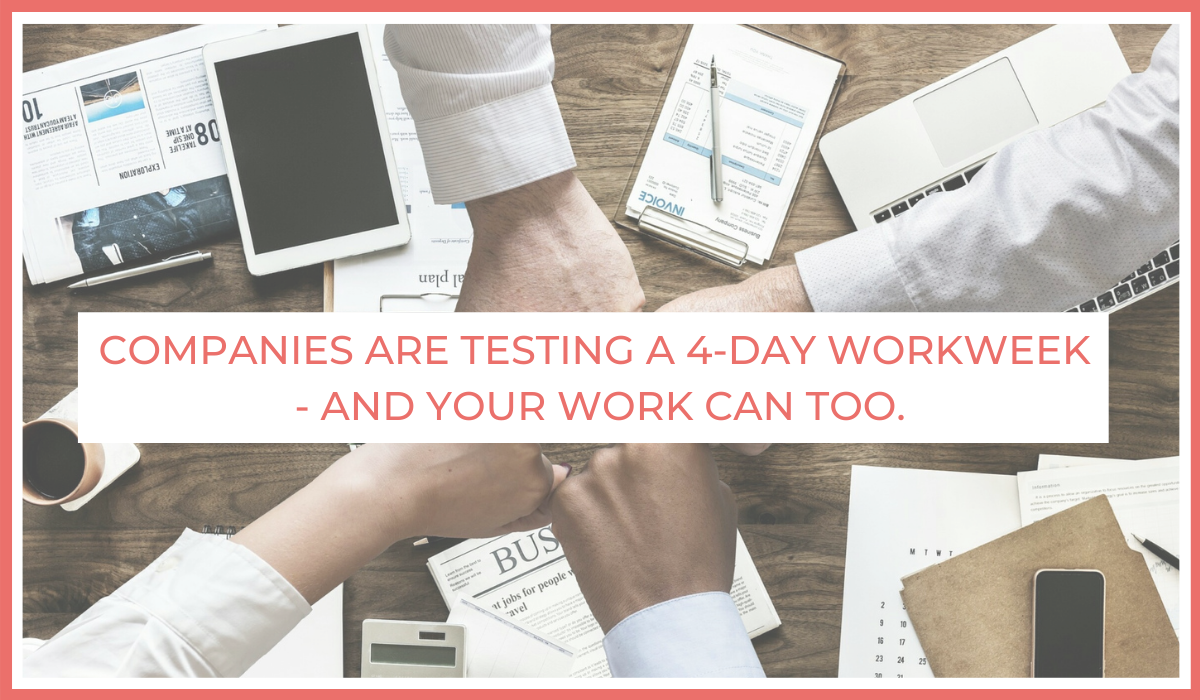 Companies Are Testing a 4-Day Workweek – and Your Work Can Too.

The grass is green and the sky is blue; it has been since the beginning of time, and so it will remain forevermore.

Because it’s been that way forever, we just accept it as “normal” and never think to question it. But, just because something has been a certain way for centuries, it doesn’t mean it’s necessarily correct or effective, right?

And to all the parents out there, this one’s for you. Don’t you find yourself saying, “because I said so” when you’re at a loss for words, can’t find a valid reason, or just because something is that way and you actually have no idea why that is?

The global pandemic has turned the “normal” upside down for many of us. It has led us to question all sorts of things that we just accepted at face value before – just like our toddlers and kids do with everything we say.

One of these is the Monday to Friday forty-hour workweek. This set schedule followed by us, our parents, our parents’ parents – it dates all the way back to 1926 and was first established by Henry Ford in his factories.

In my book, Thursday is the New Friday, I mention how: “it’s “the way it is” for almost no good reason. It is how it is because it is how it has been.” – Basically, “because I (society) said so.”

The History of a 7-Day Workweek

Most of us know the story in the Bible, where God created the world in six days, and on the seventh day, he rested.

But, other cultural groups clustered days into weeks differently: Egyptians established a ten-day week, and Romans preferred one totalling eight days. Although the number of days in a week weren’t alike, the one thing they all had in common was an allocated time to rest, reflect, or for religious purposes.

Judeo-Christians call it the Sabbath, which is either observed on a Saturday or Sunday. Friday prayers are observed in the Islam faith. In the Bahá’í Faith, the day for rest and reflection also falls on Friday.

Theravada Buddhists observe a day of cleansing the mind called an uposatha. Sunrise on the first day of the new moon signifies a day of rest for the Cherokee.

And so, over the years, it has become a worldwide norm to divide the year up into weeks consisting of seven days, with the latter part preserved for rest and religious purposes.

Except for Ethiopia, a country that isn’t in 2021 yet, as Ethiopians believe that there are thirteen months in a year, and they’re currently seven years behind the Gregorian Calendar. For example, they celebrated the new millennium on September 11, 2007, because they continued with the same calendar that the Roman church amended in 525 AD.

How Covid Changed the Game

Two years ago, the thought of an entire office working remotely was absurd. But, CEOs were pleasantly surprised by its success when they were forced to try this new system.

Employees could get some extra sleep since they didn’t have to travel an hour (often longer) to work every day, and their stress levels lowered drastically without rush-hour traffic and having to fight tooth and nail for a parking bay.

Now, having noted the reduction in stress and fatigue, directly resulting in increased productivity, many companies worldwide are continuing with the working from home option.

But why stop there?

A Four-Day Workweek Is Nothing New

As early as 2011, business management consultancy, Think Productive, implemented the four-day working week strategy. They were offered the option of working an extra 50-minutes from Monday through Thursday, and take all Fridays off but one every month. This way, if any employees chose the normal Monday to Friday, their hours in total would correlate.

The Managing Director of the company concluded the following regarding employees who opted for the new working structure:

It started as a test run in Las Vegas, and over the last year Shake Shack [https://30hourjobs.com/blog/companies-with-4-day-work-weeks/] has gradually implemented the four-day workweek across locations – without reducing any pay or benefits.

The aim was to encourage happier employees, especially during the trying times of Covid. Shake Shack reported that moms, in particular, responded to the four-day workweek positively.

An extra day off gave moms time to:

Microsoft Japan experimented with the same concept in August 2020, where employees were given five Fridays off in concession without decreasing their salary. It was concluded that less time was needed to be taken off, as employees were well-rested enough upon their return to the office after their three-day weekend.

Even the British multinational consumer goods company, Unilever, tested out a four-day workweek. Employees were compensated for a full five days’ work, even though they worked four. Nick Bangs, Managing Director of Unilever New Zealand, said in a Forbes article that “we hope the trial will result in Unilever being the first global company to embrace ways of working that provide tangible benefits for staff and for business.”

A Four-Day Workweek: For the People

A global survey was conducted by Harvard Business Review at the end of March 2021 that included 1,500 people who work 40-hour workweeks. It was found that 89% of participants reported work-life to be getting worse, 85% admitted to decreased well-being, and 62% experienced burnout during the last three months.

In addition, more than half of participants reported difficulty balancing their home and work life, and 50% weren’t able to maintain good relationships with friends, and 25% with family.

These struggles could be lessened thanks to a four-day workweek, meaning an extra day off to add to the weekend. This supplementary off time can be utilised for self-care. This looks different for different people, but may include:

How a Four-Day Workweek Is Better for Business

Having less time at work results in higher productivity and work rates. Less time is wasted taking breaks, having unnecessary meetings, and aimless scrolling through social media (we’re all somewhat guilty of this). Worktime is optimised, and time management is of the essence.

There’s a time to work, and a time to play – and employees know that when they’re at work, they need to do just that. They will be rewarded with ‘playtime’ soon.

Richard Branson, Founder of the Virgin Group, was quoted saying, “Clients do not come first. Employees come first. If you take care of your employees, they will take care of the clients,” and this couldn’t be more true. Employees who are being well looked after are more likely to aspire to excel, as an indication of gratitude to their employer and love for what they do.

Just because something has been done a certain way for as long as we can remember, it doesn’t mean it’s the only or even the best, way to do it.

History proves that as humans, we need to have at least one day of rest per cycle. As it stands, 40-hour workweeks leave little time to do so, what with all of the other responsibilities that come with being an adult in today’s society.

It took a global pandemic to force many people to slow down, take a step back, and reassess, but some companies were ahead of their time. Think Productive trialled a four-day workweek back in 2011 and reported increased productivity and higher levels of focus.

Shake Shack implemented a four-day workweek more recently, without increasing daily hours or decreasing salaries. This was to encourage a more humane work-life balance and allow employees more time with their families.

Similarly, Microsoft Japan experimented with giving employees five Fridays off in a row for a month mid-2020, resulting in a well-rested staff on Mondays who required less time off as a result.

Not only does a shorter workweek benefit the mental and emotional health of the employees, but the employers reap the benefits of happier, healthier workers with higher motivation.