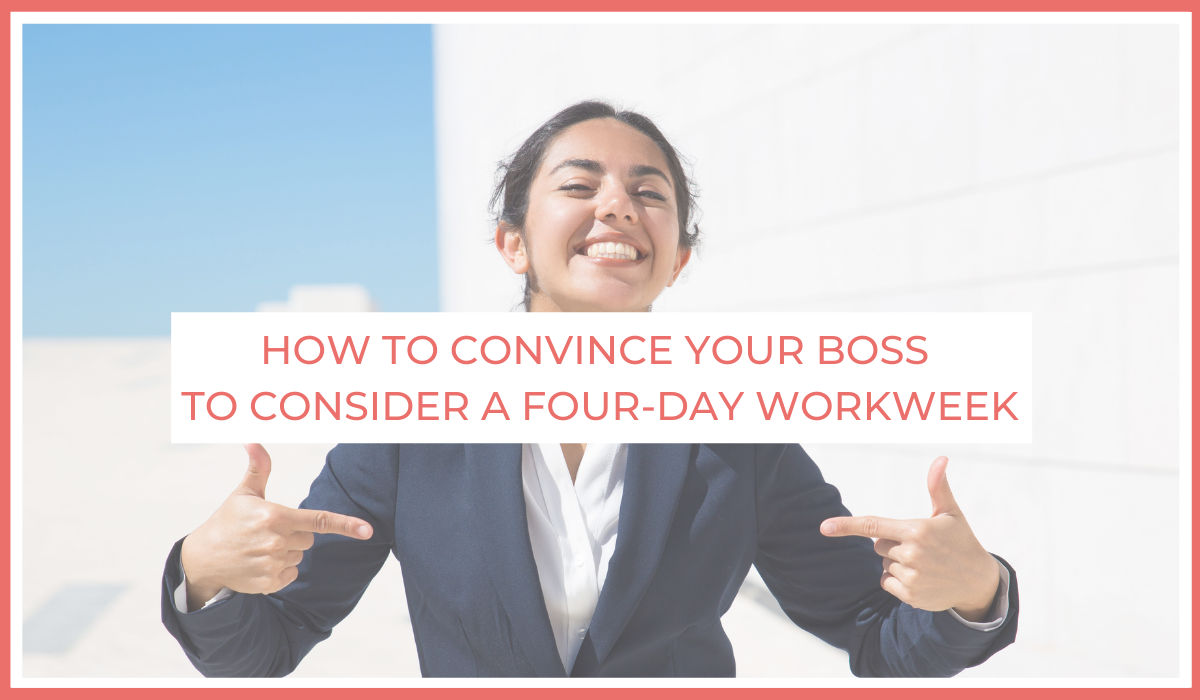 How to convince your boss to consider a four-day workweek

Research suggests that a four-day workweek could make workers more productive. Now you just need to convince your manager.

If weekends seem to fly by, be thankful you weren’t born during the early 20th century when having one day off a week was the standard for most employers. In 1922, Henry Ford doubled time off by implementing the Monday-through-Friday timeline at The Ford Company.

A five-day, 40-hour workweek may work well when output is measured by items coming down an assembly line, but productivity is different when it comes to knowledge work. COVID disrupted standard ways of working and created an experiment where companies learned that productivity isn’t measured by hours in a chair.

Perhaps it’s time to rethink the workweek and do things differently, says Joe Sanok, author of Thursday is the New Friday: How to Work Fewer Hours, Make More Money, and Spend Time Doing What You Want.

“Our best work never comes when we’re stressed and maxed out,” he says. “It’s intuitive but research points to it, too. When you move to a four-day workweek with strong boundaries around when work starts and stops, employees are often more creative and more productive.”

WHY LESS IS MORE

Researchers in Iceland tracked a group of 2,500 employees who worked a four-day workweek with the same pay and found that their wellbeing dramatically increased, and they reported less stress and burnout and better work-life balance. Microsoft Japan experimented with a four-day workweek and experienced a 40% boost in productivity, although they’ve since discontinued the practice.

It seems counterintuitive that less time results in more output. If you’ve ever tried to finish up work before a three-day holiday weekend, however, you know it’s possible to fit five days of work into a shortened week, says Sanok.

“When you reduce the amount of time you have, it forces you to make the best use of that time,” he says. “If you have 20 tasks and only time for 14, you’ll choose the best 14 and do the most essential things first.”

Most of us have heard of Parkinson’s Law, which says that work expands to fill the time available for its completion. By adopting a four-day workweek, Sanok says you’ll look at it in a new way. “It forces you to examine what you’re doing and drop the things you should not be spending time doing. You also have to address procrastination head on.”

HOW TO IMPLEMENT A FOUR-DAY WORKWEEK

The hardest part may be setting boundaries with yourself, especially if you’re self employed or work from home. Many of us may work out of boredom if we don’t have anything else planned or out of anxiety. Identify what is the trigger for working outside of the time you want to work.

“If it’s out of boredom, schedule some hobbies that provide fulfillment,” says Sanok. “If it’s out of anxiety or out of a feeling that your business isn’t running appropriately, add an extra set of eyes to determine what isn’t working correctly.”

Then measure your progress to determine if the shift to four days is working well. “You can track how many hours you work and how much money you produce,” says Sanok. “If you work 10 less hours and made 5% more, then you’ve made the case to yourself.”

GETTING YOUR BOSS ON BOARD

If you are an employee, you have to gauge if your supervisor has an industrial mindset and sees you like a machine. If you think there’s an opportunity for them to be adaptable to new model, Sanok suggests having a discussion.

“Are there clear KPIs for your role?” he asks. “How are you already judged? And consider what are the potential fires that could happen when you’re not in the office or clocked in. Then identify who could cover that.”

Four-day workweeks often work best when an entire team is on the same schedule. To handle client emergencies, Sanok suggests companies put a contingency plan in place, with one person on call on a rotating schedule. He also suggests that companies try a four-day workweek as a two- to three-month experiment, or have one team pilot it to determine how it might impact others. Then hold a monthly 360-degree review to determine what’s going well and what needs adjustment.

“No supervisor wants to look like they made numbers drop due to an experiment,” says Sanok. “They want credit for being innovative. When you take an experimental mindset and find out what works well, you can use the key learning lessons in a second experiment.”

In reality, the five-day workweek has simply been a 100-year experiment, and perhaps its time has come.

“The Babylonians gave us the seven-day week, the Egyptians had an eight-day week and the Romans had 10,” says Sanok. “It’s all completely made up. Henry Ford gave us the 40-hour week so he could sell more cars to workers who now had more leisure time. It’s no longer the Industrial Era, and we don’t have to think of people as robots and machines. The post-pandemic generation gets to decide what we want to do moving forward. Doing something different could actually make a difference.”